Check out the music video for “Kill Me To Keep Loving You” HERE.  Get the song HERE.

The track was mixed by Tim Palmer, who has worked his sonic magic for Pearl Jam, U2, Robert Plant and David Bowie, among others; and mastered by Grammy award winning Howie Weinberg (Nirvana, Prince, Jeff Buckley, Muse).

An endorsement from Alice Cooper on his radio show, “Nights with Alice Cooper,” ultimately led Brett Hellings, a well-traveled singer-songwriter to record with a powerhouse ensemble of the industry’s top session and touring musicians.  It was just a 45 second mention on a syndicated radio show, but for veteran indie rocker Hellings, who has toughed it out over the years and made his mark in NYC, L.A., Nashville and Philly, it felt like a life-changing anointing from a revered rock god.

David Davidian, tour manager for Cooper and The Hollywood Vampires, heard the show, and loved the music so much that he passed it on to some of his musician friends. Free from other commitments due to the pandemic, the new band members embraced the opportunity to work with a dynamic, still emerging frontman. 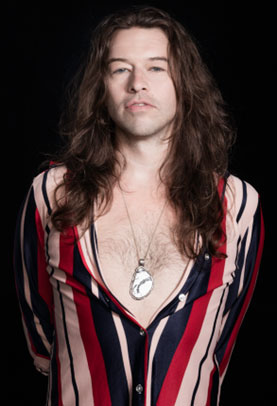 Though Brett is a prolific songwriter who has been recording his own material since his debut solo 2005 album, Restless, he was happy to make an exception when he heard the original demo for “Kill Me To Keep Loving You” – a tune written by Buck Johnson and Erik Halbig in Nashville as a potential cut for Steven Tyler’s 2016 country-flavored solo debut, We’re All Somebody From Somewhere. “Buck had given me several songs he’d written in the past, and during pre-production, he gave me the song in its raw form,” says Hellings. “The demo was intended to have a very poppy-country vibe, but I could hear its potential as a rock ballad.”

He continues, “I was just getting out of a long, toxic relationship, so the lyrics of the song about someone you love being the worst thing for you hit me hard. It’s got a bigness and is very relatable, whether it connects to a personal experience like I had or anything else in your life that’s killing you -- to keep loving it.”

Other songs that Hellings will release in the future – including singles and a potential full album down the road – were written by Hellings, Johnson, Henriksen and Fortus.

Arnoff continues, “When I first met Brett, he came to my studio and I immediately liked him because he looks you right in the eye, he connects with you, he’s very transparent, he’s right there and he has an incredible loving heart. I just knew it was going to be amazing.”  Adds Johnson, “Surpassed all of my expectations.”   Says Brett, “The coolest thing about working on the Hellings project with these consummate musicians was realizing just how easy and comfortable it can be, and how much I could learn, working in the studio with truly creative people who pour everything they’ve got into making a song perfect.”  He continues, “Everyone was all about getting the best of what we could bring to the art form. So many of my previous band experiences were full of drama and obstacles, but this was all about the music and camaraderie. A lot of great friendships and relationships were forged in the studio, and I’m excited to see where the journey takes us from here.”